Lest you think that this little (tiny?) movement of ours is all rainbows, blissful shedding of the unnecessary, and careful planning of under-stair storage, every day brings us many degrees of emotional upheaval. Admittedly, Jim and I both suffer from too much thinking and emoting, and it can get in our – and each other’s – way.

As an example, we are swirling a bit about the status of our property. The land we purchased has a broken title, which means that somewhere in the course of the parcel’s history, the legal lineage became “unclear.” Specifically, it was bequeathed by the last clear-title owner to her daughter, and along the way her original intent to have it divided among that daughter’s children upon her death was not honored. Rather, it went to one of her four children, and through him, wound its way into the hands of his sister, who sold it to us. So, there’s an argument to be made that the other sibs and/or heirs have a right to a portion of our parcel.

Suffice it to say, we might very well be crazy to take on the legal responsibility of clearing the title. We, however, think its worth the effort, mainly because we feel the land deserves the clarity. We did a lot of calculating, projecting, and what-ifing, and then put in a low-ball offer of what we thought was a pretty safe investment. It was accepted after some haggling, and now we are legally 50 percent owners of the property.

So, how much of an investment should we make on the property given that fact? We need a road, water catchment, fencing, etc. to ready ourselves for the house.

Ever the optimist, I think we should do it all and do it straight away! Everything will work out fine, and even if it doesn’t, we get the pleasure of enjoying Lanikaimakani while she’s ours. Who knows; we could die tomorrow, so why not?

Algorithm Jim sees things a tad differently. To him, moving forward without a cleared path – much less title – is risky. Investing money or emotion or hope is too high a price to pay with so many uncertainties.

Yeah, I get it. But we could die and miss it! I recently listened to the first episode of Happier with Gretchen Rubin‘s podcast, and she talked about the difference between a maximizer and a satisficer (The Paradox of Choice, Barry Schwartz), and their distinction is at the core of Jim’s and my conflict.

✔ Jim: Wants to make the optimal decision = maximizer.
✔ Me: Makes a decision or takes action once my criteria are met = satisficer.

Click on image to take the quiz to find out which you are.

Here’s the good part. I want to understand where Jim is coming from. He’s incredibly smart and fascinatingly complex of thought. Maybe he’s right, and I’m – gasp – wrong? Why would I take a step knowing I might trip and fall down, when I cold prepare more on the front end to ensure I move forward gracefully and without injury?

This particular crossroads makes me think of my kids. I’ve been known to describe the difference between them based on how they first started walking. 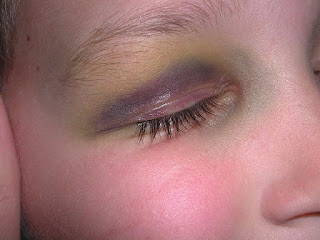 Nick took his first steps at 10 months. He had a black eye (image) and stitches by age one and still, at 22, crashes around like a bull in a china shop. No worse for wear, he keeps successfully propelling himself forward.

Ellie, on the other hand, didn’t walk until she was 18 months. Man, she could verbalize demands long before she stood on two feet. But when she finally did, she never looked back, putting one careful foot in front of the deliberate other, guided by a desired outcome before making a move. (Sidebar: to read more about Ellie, now 20, and her perfectionist ways, read her blog Confessions of a Want-to-Be-Perfectionist.)

And…I love them both unconditionally for their caution (and lack thereof) and their abandon (and lack thereof). It’s fascinating to me to adore them boundlessly and equally when they approach the world so differently. They are living, breathing reminders that there isn’t one way to be a good person, and there doesn’t have to be one right and one wrong. So why am I struggling to give equal weight to the perspective of someone who thinks differently than I? Maximizer or satisficer, be damned!

I imagine that we all respond to some pretty developed reflexes, and mine make me want to clench my teeth and hiss, “Sheesh. What’s the big deal? Throw caution to the wind! Everything will be alright!” And yet the better version of myself is saying, “Really, what is the rush? Despite the what-ifs, we don’t plan on kicking soon, so why not take things one careful step at a time?”

The devil and the angel in a meeting of the minds.

Yet…when I quiet the divisive voices for long enough – and hopefully one day permanently – I see clearly that our next move will be determined when we settle into the space that lies somewhere in the middle of our divergent approaches. Not his way. Not my way. Our way. The sum total of our wisdom and instinct.

Now, if he’d only hurry up and get here! I’m waiting!