I always thought I knew the definition of family… names, bloodlines, history, traditions, heritage, etc., and largely chartable on a clean, geometric org chart on an ancestry.com map. Children permanently weave two lineages together, establishing the next generational baseline, until they themselves join with another human and pass the torch to offspring. And so on. Sure, hiccups like death and divorce occasionally add little offshoots, but the core of the family remains clear and intact, serving as a guide for name selection, Thanksgiving seating assignments, wedding guest lists, and Christmas card mailing.

Peter, Priscilla and I fulfilled our responsibility for the family weave by marrying and having children. In 2000, a year after our mother died, though, that neat little family tree package began to morph when dad planted saplings with his new wife Barbara and her son Matt. With them came a complicated web of people, and the work of strengthening and growing as a single unit proved a challenge. Given that our trunks appeared to be firmly planted with saplings of our own, my father worked mightily to solidify this new offshoot. Like sticking a palm frond into the soil of an oak, though, it looked pretty for a while – even interesting – but the leaf never took root and eventually got swept away in the wind, along with the rest of that tree.

Surely unaware that he had been putting so much energy into growing that fledgling bud into a solid branch on the Frost tree, dad returned his energy to watering our garden, and it was so nice to have him back. In his relative absence, our next generational forest had begun to thin, as we focused myopically on the strength of our immediate roots. Things had changed in many ways, of course, but it’s fair to say that his return comforted us with its familiar traditions and mostly common history. Nevertheless, it clearly wasn’t enough for my father, as our dependence on him for living had diminished and he had more boughs to break. After all, being a provider had always been his priority, and he had done so exquisitely, making sure never were short on water, fertilizer, and shade.

In the years that followed, our forest continued to shift and grow. Dave and I decided to repot ourselves; Dad married Katie; and acres of new soil were sowed as Jim and I started to build a new canopy together. 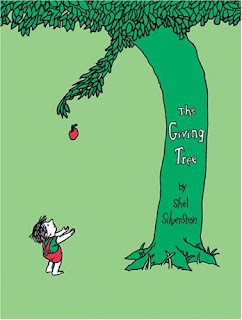 Yes, the tree metaphor has been heavy-handed, and it might not be surprising that I’ve been thinking a lot about Shel Silverstein’s The Giving Tree. The grownup tree gives and gives; the boy takes and takes, and ultimately the mama sacrifices her majestic self for the strength of the little. We root for the boy’s awakening before it’s too late, yet the inevitable happens, and they miss the opportunity to share in one another’s company. Rather, mama tree, now satisfied that she has done everything in her power to give the boy what he wants, goes solitarily toward the end of life.

Even given the era of the book’s publishing (1964), the fable inspired controversy in its interpretation of the circle of life. I always presumed it was a story that was intended to explain to children the role of parents and the chronology of existence. However, I never could share the story with my kids, because it felt like it was giving permission to view life in the transactional versus in the emotional and that there is some prescribed order of things that make hyper self-focus okay. It’s always felt so tragic.

Why doesn’t the boy see that it’s his turn to return the fruits of his youth? Doesn’t mama deserve care and feeding, too? Even though she’s given her branches, doesn’t the boy see that he can help with regrowth? When does she show him, that no forest is a forest without the sum total of its trees? And what about that from birth to death, we have something to give to and learn from one another each day?

I’ve been spending a lot of my vacation time thinking about family. Partly because most of us are or will be together (sadly, Peter and his gang will not). But mostly – I think – it’s because of the imminent sale of the property here on Eleuthera. I am struggling to imagine life without the bloodline of this very special place that has fed our Frost Forest for decades. Regardless of life’s demands, coming home here has been a place to refertilize the soil that feeds us. By providing us this garden, my father (and his father before him) has done and sacrificed so much to ensure our roots deepen and our boughs strengthen. Dad has been a giving tree of epic proportions.

Sure, with a family of my own, I’m wholly devoted to the growth of my saplings and the newly planted trees that now constitute my forest, but deep in my heart I know that I would be nothing but brush and tumbleweed were it not for my parents. Now firmly in the second half of my century of life, I am keenly aware of how I got here and all that it took to keep me growing toward the sunlight. Maybe I no longer need my father’s water or shade, but the rings of my trunk continue to do their thing, never resting in finality, and he continues to have a measurable impact on that growth.

And yet, like the mama tree, has dad’s devotion to being the provider prevented his developing an appreciation for his own rings? Give, give, and give some more, until one day your bark stiffens and eventually turns to dust and return to the earth? Is that how it’s supposed to be? Alas, we will never know what might have happened to The Giving Tree if she had let those around her feed her soul and spritz her leaves. Never will we see even a glimpse of what it would have been like for her if she had spent her life as part of a glorious forest, thick and green in its interconnected beauty.

Hawaiians surely would laugh at The Giving Tree and the one-sidedness of it all. From cradle to grave, they first and foremost are devoted to one another, sharing in the deep responsibility of every age of life. Can global adventures be missed? Sure. Do plans to change the world get thwarted if developed at all? Absolutely. But really, who gives one iota of a shit? They have food to eat, roofs over their heads, and jobs to do, just like anyone trudging through this thing we call life. What they also have is perspective. Without family and the tangled ecosystem of trunks, leaves, needles, vines, and branches that define them, there is nothing. Nothing, that is, but being alone.

And to Hawaiians, being alone simply is not an option.

Our giving tree is tired, and it’s no wonder. He’s cut off every limb for us, and does not know how to accept our encouragement of his regrowth. While I feel immense gratitude for him, I also feel great sadness that he, like The Giving Tree, does not to see that those for whom he sacrificed so much are willing and eager to bestow upon him our gifts to his life. Of course we cannot replace the branches already felled, but we can stand tall with him, providing protection from the wind and shade from the sun.

Rather than working hard to protect us from his diminishing ability to give and accepting increasing solitude during his twilight years, I hope for us all that he might take a page from Hawaiians and welcome his family’s nourishment and love. The pride he takes in the majesty of the trees he’s sown deserves – indeed needs – to accept our devotion in return. Only through this shared strength will it be possible to ensure that the Frost Forest remains beautiful, strong, and purposeful. And when it comes time for his glorious giving tree to return to the earth, it will bring us great joy to shape his trunk into the hull of a canoe, with gorgeous lines, strength of giants, and his deep and generous soul, in which we – and the generations that follow – will continue to take along on life’s journey.