Skip to content
Perfectionism. I am certain it’s a deadly disease. It’s symptoms can be debilitating, and its triggers are unknown. To be clear, I’m not talking about the “see how perfectly I am raising my kids” or “I want a perfect A.” I’m talking about the etherial pinpoint of a destination – an aspirational ending that ensures zero regret and no anxiety. Gone are the what-ifs and if-onlys in the Land of Perfect, as is the need to have to correct mistakes. Ever.
Most of us know that perfection is only something achieved in situations where there is no subjectivity, no objectivity, and no judgment at all. It might sound blissful, on the one hand, but life without those dimensions of emotion?

No, thank you. I’ll take angst, fear, and doubt any day.

Maximizers and satisficers dwell differently in the perfection zone. Neither actually believes in the existence of this elusive Fantasy Land, but the former definitely takes a page from the guide book. To them, everything seems to boil down to a mathematical formula; as long as they have all the variables, an ideal solution can be found. Having to make a decision, their brains spin frenetically, working to imagine every possible scenario known to man. If… and apparently only if… that information is gathered successfully, they will move forward with determination. When they can’t round up all of the pesky nuggets, well…it’s some kind of diabolical torture.

Then, throw into the mix, say, a wife named Lucy who is a satisficer and who just wants to get things done…Oh, Houston!?

So much for the hypothetical.

After decades of being farmed and overgrown, our property is chock-o-block full of undulations and brush, both of which make it brutal to drive and walk on – no to mention transport your house over. So when we arrived on Friday evening from Condoville, we were thrilled to discover that Leonard had come, scraped the driveway, and worked to level the piece of land where the house will sit. So exciting! What an awesome thing to come “home” to! 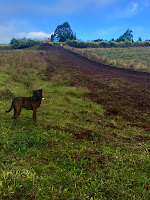 Having landed in darkness, we woke up early to explore our newly smoothed surfaces. The road looked like heaven in all of its rich, soily brownness, and the postage stamp of a house-site, carved neatly out of the hill, seemed like a window into the beautiful world we were building. I practically could envision the herb garden, along with everything else in its rightful place.

There we stood, overlooking the masterpieces, heads bobbing back and forth, project to project, from our central vantage point. I was grinning from ear-to-ear and from the inside out, barely able to contain my excitement. It was happening! Really happening! Cue the rainbows and chirping bluejays!

“I thought Leonard would have called to let me know he was going to start,” Jim said. 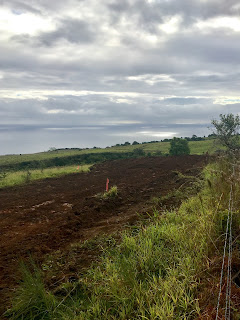 Wait…what?? I had just assumed that Jim, too, had been lost in a glorious moment of bliss like I was. Quite the contrary. His face told a thousand words, with its furrowed brow, ashen color, and pinched mouth. He looked like the personification of anger, anxiety, hopelessness, and sorrow all rolled into one. Let’s just say my trip back from Cloud Nine was quick and bumpy.

How could it be? How could this progress be so disappointing? Was the road put in the wrong place? Was the site too small? Was this whole tiny house thing something I foisted on him and something he no longer wanted? Was he going to leave me?

Maybe it’s a leap to go from Leonard’s not making a call to my being abandoned, but, alas, that’s where this unhealthy mind goes when it proves to be a poor judge of a situation and when it discovers that nothing is as it appears. Gratefully, I am much quicker to recover from this drastic – if not self-fulfilling – mindset, which positioned me better for the impeding conversation about what was going on in Jim’s brain.

Long and short of it…perfection, and the countless components of this particular equation. If we had known Leonard was coming, we could have added pins so he could have seen the spot we wanted versus just remembering from our conversations (which he did, by the way). We shouldn’t have driven down the driveway since the land is saturated after all the rain. I can no longer see where the house will go, and it may not all fit now that there’s a bathhouse, too. And it doesn’t look level. Will Leonard be coming back? Will we have to pay more money to make it better?

Wait, Jim. You forgot to question the meaning of life. Sheesh.

For me, all those pieces will be worked out or become irrelevant as we continue to move forward. Propel. Adjust. Propel more. Adjust some more. Done. For Jim, understanding these details and being able to answer those questions are vital to accepting the current steps, much less taking any new ones. You see, I am certain there is no absolutely right answer, and he is equally as sure that there is. Frustrating, of course, but fascinating nonetheless.

The beauty of partnering with someone later in life is the reality that we get to develop our relationship on a foundation of wisdom and self-reflection that, in the chaos of life, was elusive in our younger years. I am sure there are lots of folks that have evolved gracefully in the company of long-term relationships; I’m just saying that it feels much easier to me to move forward without the anvil of historical expectations, of both the met and unmet persuasions. Rather than wanting to rip Jim’s face off for raining on my parade, I find myself happily entering into the divergent perspective debate, eagerly soaking up his version of the facts. I listened hard, trying to see how I could help our puzzle pieces to find their way into an interconnected pattern that exposes the image of our shared thinking. It’s really kind of cool. Chalk one up to mid-life growth.

Just when we thought our brains were going to explode from the analysis of it all, Leonard appeared at the top of the driveway and started to make his way down the newly minted road on his Tonka Truck. We shared an unspoken look of gratitude that we were able to set aside our momentary paralysis to honor his arrival.

“Were you surprised when you got here on Friday and found a road?” He beamed with pride. So that Jim would have at least a few moments to prepare further his list of queries, I was quick to reply with what must have seemed like an overly effusive, “Yes! It’s beautiful! We absolutely love it!” My gushing sounded ridiculous, even – especially? – to me. 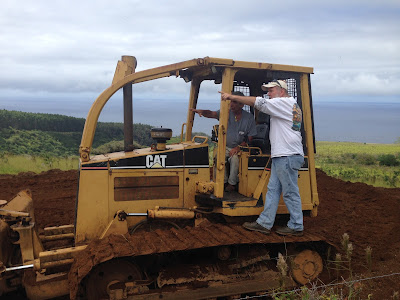 Leonard, though, had the situation pegged. He immediately turned his attention to Jim and said, “I just wanted to get us started. The fun begins now! Let’s figure out where we go from here!” And just like that, permission to stop having to have had it all figured out was granted. Jim jumped up on the tread of the machine, and the two started going back and forth with what-ifs and thens. Almost instantly. the color came back to his face, and maybe even saw a smile. It was beautiful. Neither noticed when I slipped away and headed back to the camper. Soon, the steady grumbling of the machine filled the air, stopping every now and again for what I presumed was a round of conceptual exploration.

It occurs to me that Jim is no more of a perfectionist than I. He doesn’t really care that everything is in its proper place or that it happens in a certain frame of time. What he is is a processist, if ever their was one. Every step of the way needs to be clear and purposeful, and – above all else – each of those steps needs to be logical and make sense. Imagine. Plot. Reimagine. Plot some more. Take step. Done. Done? Yes. Done for the moment happens each time a step forward is successfully completed.

Honestly, I don’t have the instinct, experience, or patience to know how and why everything does and and does not work. And I don’t yet have the wherewithal to focus my brain exclusively on the situation at hand. So, I’m going to take a page from his guidebook and start facing the angst, fear, and doubt that accompanies quests for information. Who knows, I may just learn something.

Hopefully he will let me bring my rainbows and bluejays.