When I first saw the word “Laupāhoehoe” on a road sign as Jim and I made our way around the Big Island on our rented Harley during my first visit close to four years ago, I remember thinking to myself that I would never feel like anything other than a foreigner in this Hawaiian land. And if I was naive enough then to find solace in the fact that the language has an alphabet of only 13 letters, I know better now. How is it possible that words can be so dang long with so few letters? And why is that so damn discombobulating? Man, words like “Narragansett” and “Misquamicut” had been rolling off my tongue for decades; my brain, I thought, was well prepared for anything.

Yet there I was – and here I more often than not remain – sounding the dang thing out like a first grader.  “L…ow…pa…hoy…hoy.” Phonetics, man.

Of course the Hawaiian language works with only the 13 little buggers because they just combine lots of small words to make bigger ones. Easy, right? Ha! Not only can the simple addition or omission of an accent change a meaning completely, there also literally can be dozens of definitions of and interpretations for each word.

For example, if I give Laupāhoehoe a go, I get…

Works for me. We are, after all, in Volcanoland. It’s poetic, and I can work with poetic. But wait. Not so fast. According to the Hawaiian-English dictionary , I also might get…

Ugh. Just click on the hyperlinked words, and you’ll see what I mean. It’s like language, psychology, calculus, and experience all wrapped up into one, the majority in which I have very little capacity.

I’ve always considered myself “culturally sensitive,” having travelled a lot and been raised by a family of globe-trotters. I’ve felt empathy for my South African sister-in-law as she dealt with our setting silverware on the “wrong” side of the plate or when she has difficulty conveying instructions to my brother, life about giving the dog worm pills because all he hears through her accent is “wumples.” And I really did feel for my French brother-in-law when, during his first visit with what would become his future family, he donned a spandex, only-slightly-larger-than-a-bikini bathing suit much to the shock of us puritans. Who are we, after all, to decide what is right or normal? (He did, btw, make a quick trip to Warm Winds Surf Shop to buy some board shorts.)

It never occurred to me that moving to Hawaii would tap into my global-citizen-extraordinaire self. Yet I was prepared. It’s the United States, for goodness sake. There are, after all, Walmarts, Targets, and Home Depots. No passports needed or international data plans. How different could it be?

Oh, different. Very, VERY different. And the road signs are just the tip – or the “hoe” – of the iceberg.

I could spend pages and pages writing about the fascinating history of Hawai‘i – its royal family lineage, its battles, its colonization, its loss of sovereignty, its science versus spirituality conflict, its earthquakes, its tsunamis, its music – but suffice it to say that today’s Hawai‘i is the sum total of a whole lot of things that are experientially foreign to me. Even George Clooney failed to prepare me in “The Descendants,” which is devastating, of course, because…well…it’s George (though I do recommend the flick as a window into Hawai‘i’s unique vibe). So, rather than try to “get” it or “know” it, I’m following the lead of what has become an insatiable curiosity about people’s connection to Hawai‘i, which always provides insight into who they are at the core.

Our Lanikaimakani neighbors are “local,” meaning not recent transplants like us “haoles.” Whether for decades or generations, these five families make up what feels like a perfect community for us; they know one another, like one another, and protect one another. We witnessed how special they are first hand when our dog Malu went missing from our property during our first weekend there. No plate of freshly-baked chocolate chip cookies brokered our introductions. Instead, we delivered flyers and distractedly “talked story,” while we hurried to move along to find our pup. We weren’t gracious by any stretch. And yet, what a way to jump in (let’s face it, chocolate chip cookies wouldn’t have happened for some time even if I could have baked them in the camper). From those meetings on, we’ve been in constant email, text, and road-side communication with each one of them. “We hear Malu is back! How’s she doing?” “Here’s the contact info for a plumper we like.” “Your fence needs repair on the Hilo mauka side….can we help?” “Just want to be sure the person walking your property is meant to be there.” And our favorite, “Come over for beers!” 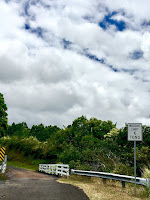 On Saturday evenings we have been making the pilgrimage to Kekua’s house on our Hilo side and spending the time with him and his father Sam and step-mother Shelly. We ask a lot of questions (“How many gallons is your catchment?”), talk about the challenges of local government (“brah, how you gonna cross a six ton bridge with a 10 ton firetruck to put out a fire up here?”), eat grilled meat (Kekua’s a butcher…god bless him) and Fritos (Jim has to bring his own food since locals, as far as I can tell, don’t do vegetarian), laugh, and drink. More drinking than we are used to. Miller Lite, Keystone Lite, and Kirkland vodka (the blue one, which is Kettle One – NOT for the love of god the red one, which is Grey Goose) and tonic. Ever the foreigner, I drink white wine. Jim? Bourbon. We bring our own. 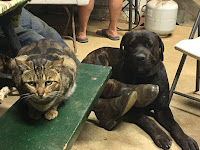 Even with the most spectacular sunsets in the distance, as is customary, we sit in their garage facing mauka, on rickety folding chairs around a tattered vinyl-cloth-covered picnic table. This setting becomes more of a masterpiece as the night goes on, like an evolving still life of beer cans, bottles, tupperware, cats, bug spray, and chopsticks (for whatever delectable treat Kekua’s Shelly might spring on us). Beers are kept in a cooler on the tailgate of Kekua’s pick-up, which is backed just enough into the garage to make access mostly effortless, and we are endlessly entertained by their herd of two cats, two dogs (plus Malu), cows, and chickens. Animal people rock.

And we are not quiet. As the radio blares Hawaiian music, we work hard to understand each other’s language – us, their Pidgin (a combination of Creole, English, and Hawaiian)… them, our queen’s English. As if sounding out and determining meaning of Hawaiian words isn’t hard enough, they pepper their sentences with a melodic and unpredictable slang that makes your face smile and your head spin. Even with the special training I got from my ‘Iolani School colleagues when I first moved to Hawai‘i, I often rely on tone – and not words – to catch a drift.

Naturally, we think we are fabulously easy to understand. Really, though, we clearly say things that baffle them, using words that are as foreign as French. “Bailiwick” is a good example. As is “heretofore.” I can’t possibly convey how awkward it feels when one slips out. We sound so uptight! In fact, we are well aware that using these types of conversation-stoppers (heretofore considered a gift of the British Motherland and definitely something to strive to use) is what locals mean when they profile us as haoles (sounds like “howlies”). While this is a term that can be perceived as an insult, we normally don’t have a problem with it. Anything to help us get over European-descendent selves is okay with us. In this Polynesian and Asian culture, we definitely can sound like douches more often than care to admit. What’s most important, though, is that we aren’t douches, and our neighbors have already sussed us out and realize that. So, we get to laugh a lot about the dynamic, and we like each other. A lot.

On Saturdays, we’ve tried leaving at what we consider a normal bedtime – say, 9pm – but they’ll have none of it.  We go when they are ready for us to go. It’s the way it works. So, we have seen midnight more often in the past months than I can remember since late night feedings. And we are loving it. In fact, things are really kind of normal. By that I mean that I am starting to feel like I can be just who I am…a foreigner in a foreign place that I love for what it is and the people in it for who they are…long, nuanced words and all (yes, “nuance” is another one of THOSE words).

It is interesting to feel relaxed about settling into a new culture, probably because it steadily is becoming our own. Snarky Jim likes to say to me, “What would the members at the club think?” It’s become our way of reminding ourselves how different things are now. Indeed, where I am now is a distant reality from the life I lived before.